Landlords, Why Screen Tenants? Here’s Why

He said it best himself: “Check your tenants out before you let them occupy. That’s the one thing I was guilty of.” A Florida man is out more than $15,000 in damages after thieves, who may or may not have been his tenants, ripped off everything that wasn’t nailed down from his rental house. 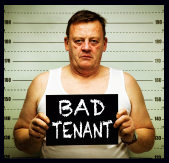 Actually, they did steal or damage several items that were nailed down, screwed in, glued on and attached to the structure. Here’s a partial list:

How could this happen? First of all, the house was in Florida and the landlord lived in Washington state. Next, he apparently had not received a rent payment “in months.” It was only then that he attempted to contact the tenants. Unsuccessful at reaching them, he trekked across the country to check on the rental house only to find it stripped.

The homeowner is new at the landlord business. Purchased as an investment he decided to rent the home after unsuccessful attempts to sell it. Out-of-state owners sometimes make classic landlord  errors that might have prevented this loss:

Perhaps this major theft could have been avoided. While the landlord doesn’t know for sure that the tenantswere involved, he has not been able to reach them for months. Screening them thoroughly would have at least informed the landlord whether they were credit worthy, had a good rental history, and had any criminal history. It’s always better to be safe than stripped!