A 20-year-old Billings man who attacked his girlfriend and stabbed his landlord when he tried to intervene admitted to charges Friday in District Court.

Dustin Greg Kaufman appeared before Judge Ingrid Gustafson and pleaded guilty to felony charges of assault with a weapon and aggravated assault.

Kaufman also admitted a misdemeanor charge of partner or family member assault in a plea agreement that could result in a seven-year sentence to Montana State Prison.

Kaufman admitted that on June 18 he got into an argument with his girlfriend in a downstairs apartment they rented on Golden Avenue from well-known Billings entertainer Ian Elliot. During the early morning argument, Kaufman choked his girlfriend. 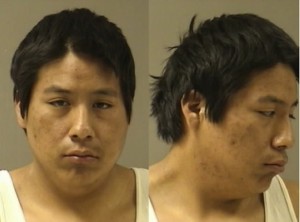 The woman ran upstairs, and when Elliot tried to protect the woman and his elderly mother, Kaufman slashed Elliot in the neck with a knife. Elliot also suffered stab wounds to his back, but was able to fight back by hitting Kaufman with kitchen pans.

Officers summoned to the residence by a 911 call made by Elliot arrived in time to halt a further attack on Elliot or the woman. As he was being arrested, Kaufman stabbed himself several times in the neck. Officers used a Taser to subdue him.

Kaufman was was taken to Billings Clinic for treatment and fled the hospital two days later. He was arrested the next day while hiding behind the West End Wal-mart.

Kaufman has remained in the county jail since his arrest on a $100,000 bond. A sentencing date will be set later.

A plea agreement calls for prosecutors to recommend that Kaufman receive concurrent prison sentences of 10 years, with three years suspended, for the felony crimes. The prosecution will ask that he receive a one-year jail term, with all but one day suspended, a $100 fine and 40 hours of anger management for the misdemeanor.