Urine on the carpets, holes in the walls and rubbish rotting in the lounge.

They’ve been described as tenants “from beyond hell”, but Tauranga landlords and property managers say they are often at a loss to evict even the most appalling occupants due to New Zealand legislation weighing so heavily in the tenants’ favour.

Horror stories have emerged after the Armed Offenders Squad swooped on a rented Otumoetai Rd property.

A man was arrested on unlawful possession of ammunition charges and the landlords of the property refused to comment, but other Tauranga landlords and property managers have come forward to share their stories of demon tenants.

Tauranga property owner Linda Paltridge said after two bad experiences with tenants she would never again rent her properties, preferring them to remain vacant than subject herself to tenants who were from “beyond hell”.

“I had one group, they were behind on their rent. When we finally did get them out, the place was trashed. They left rubbish rotting in the lounge.

“We let another lot in and they were really good for a couple of years and then one day she called up and said she wanted to leave. She had flooded the bath and ruined the carpet, there were handles missing off drawers, cuts down the doors, a smashed bench and cat pee all over the carpet,” she said. 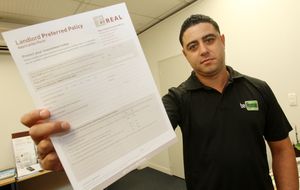 And despite the damage to properties such as Ms Paltridge’s Greerton flat, the law remains in the tenants’ favour.

Property manager Josh Fitzgibbon, of BeHome Realty, said he had dealt with hellish tenants as well.

“I’ve had a lady front up for a house and she provided false references.

“Two days later, we had gang members on the booze at the property about 10am. There were about 10 of them.

“They ended up trashing the place and doing a runner. They completely just tossed the place over, urinating on the carpets, and they must have smashed each other into the walls because there were body holes,” he said.

Mr Fitzgibbon said he had to deal with terrible tenants once or twice a year.

Landlord Phill van Syp, owner of two rentals, had a tenant who occupied one property for six years without incident. But he then spent the last year damaging the property before fleeing with three weeks’ rent in arrears.

He had to fork out about $4000 cleaning up the house. “It was a good property but, basically, our house became a junkyard. It became an absolute nightmare.

“He left enough rubbish to have $1000 worth of skips filled. It was $500 to get cleaners … then we’ve got a new oven because that had been trashed, the blinds had all been damaged. Every wall looked like he had played darts on it,” he said.

Landlords need to give tenants three months’ notice to terminate a tenancy, while tenants only need to provide three weeks’ notice.

When tenancies turn sour, an intervention from the Tenancy Tribunal can take up to two months.

As Mr van Syp discovered, a tenant who doesn’t pay rent for three consecutive weeks could be evicted – but it’s not a swift process.

“You can’t do anything for 14 days and then after that you can apply to the Tenancy Tribunal. And a speedy process is four to six weeks, so you can be anything from two to four months without rent before you get to the tribunal,” he said.

“If you get a really difficult tenant and you can get them out in three months, you’re lucky,” he said.

Mr Williams, principal at Tenancy Practice Service, said landlords must be able to prove unlawful behaviour had taken place at the premises.

He said the main weapon in a landlord’s arsenal was the 90-day termination in a periodic tenancy.

“The prospect of being locked into a 12-month contract … and a problem arises in month one, which it usually does, then you’ve got 11 months of nightmares.

“The majority of landlords think a fixed-term contract is a great idea, but I personally advocate against it,” he said.

But Greg Purcell, principal of Ray White Real Estate at the Mount and Papamoa, said bad tenants were a minority and the truly terrible tenants were “usually few and far between”.

The Tenancy Tribunal can make an order terminating the tenancy if it is satisfied that:

The rent was at least 21 days in arrears.

The tenant caused, or permitted any other person to cause, or threatened to cause, substantial damage to the premises.

Each year, the Department of Building and Housing receives about 49,000 applications for Tenancy Tribunal hearings from landlords and tenants. In Tauranga in 2011, there were 1948.

The number of tenants taking a stand against landlords by applying to the tribunal has grown by 1.5 per cent in Tauranga during the past five years.

When landlords are at fault

It’s not just tenants who cause headaches for landlords.

Many tenants say landlords are often the ones at fault when tenancy relationships break down.

One tenant, who did not want to be named, told the Bay of Plenty Times Weekend she lived in a house last year where her landlord refused to fix a ceiling leak, even when it saturated her bed and carpet.

“It progressively got worse, and then one day I remember coming home and it had rained, and about a half-metre of my mattress was fully soaked. It had gone through my bedding, my mattress, the base of my bed and on to the carpet below,” she said.

The woman said the landlord was a builder who knew the house was leaking and said he would fix it over summer. He finally fixed it six months later.

“I had to stay on the couch upstairs sometimes, or I stayed with friends,” she said.

Karissa McGregor said on the Bay of Plenty Times Facebook page she had scars from flea bites from a grotty flat. The property managers refused to fumigate the infestation.

“My partner, close mate of mine and myself moved into the place we were in at the beginning of this year. It was initially fine. We filled out the form where the tenants can state what they found wrong with the house when you first move it. Now those first couple of nights I got bitten a couple of times by some insect but didn’t think anything of it. And due to it being my first rental it wasn’t something I initially thought was a problem with the house itself. “It wasn’t until I was getting eaten alive by what I found to be a massive flea infestation that I decided to call the real estate agents.

“By then I was covered head to toe in disgusting bites and was still getting bitten. The agents said that it wasn’t their issue and they can’t do anything about it because I didn’t state it on the initial tenant form. Thankfully they died out [ … but] I still have scars on my legs from the flea bites,” she said.