Tenant from hell trashed home leaving landlord with £20,000 clean-up bill… but won’t have to pay a penny

A landlord was left outraged after a judge ruled that a ‘spiteful’ teenage tenant who smashed up his home causing £20,000 of damage did not have to pay a penny in compensation.

Glenn Schofield rented his four-bedroom property to Lee Davis, 18, but problems began in June last year when the teenager’s girlfriend moved in.

Nightmare: When landlord Glenn Schofield (pictured) finally managed to evict his tenants, he found the kitchen appliances and fixtures were destroyed, the windows had to be boarded up because they’d been smashed and debris covered the floors of every room 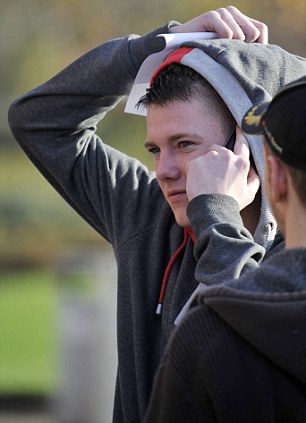 Mr Schofield spent months going through the courts to get an eviction order for the Darlington property but by the time he succeeded, Davis, who has never had a job but wants to join the Army, had smashed it up in anger at being asked to leave.

The landlord spent £2,000 cleaning the house after the pair finally left in August this year, while his insurer quoted another £18,500 to repair further damage, including replacing broken kitchen fittings and appliances. A toilet had also been left blocked to overflowing.

Sue Jacobs, prosecuting, told the court that paint had been thrown over walls and the fireplace, with ‘extensive damage’ in every room.

She said police had to board up the property on the day the couple finally moved out, adding: ‘The banister had been completely ripped off, paint had been thrown over the walls and fireplace, doors were smashed and windows broken.’

Judge Howard Crowson told Davis at Teesside Crown Court this week that he wanted to make him foot the bill but could not as the teenager had no money.

Davis’s barrister, Rod Hunt, told the court: ‘If he had been a celebrity hell-raiser or a member of the Bullingdon Club he would have just written a cheque, but he’s not.’

Davis, who was arrested after police traced him to a new address near Glasgow, pleaded guilty to criminal damage and was given an 18-month community order and told to do 300 hours of unpaid community work.

Mr Hunt told the court that Davis hoped to join the Army, and either a prison sentence or a suspended jail term would have resulted in ‘the door being slammed shut in his face’. Destruction: Windows had to be boarded up by police when the property was vacated as it was unsafe Squalor: Davis went on a wrecking spree, leaving every room in the house with extensive damage

Judge Crowson said: ‘I did wonder whether I was going to have to lock you up. You have admitted some quite unpleasant damage – spiteful, really.

‘I wish I could make you pay for the damage you have done. I can’t. But I note it is your intention to obtain paid employment and, perhaps, the insurers will pursue you then.’

Mr Schofield said the sentence could encourage other vandals, adding: ‘I would have liked him to do some hard labour – maybe cleaning somewhere would have been appropriate. It is a very disappointing situation.’