A Memphis rental property has been dubbed the ‘Dirtiest house in America.’

Imagine spending your life wading through mounds of garbage, drowning in a sea of trash everywhere you turn. It is hard to believe that someone could live like that on a street where neighbors had no idea what was going on in the house next door.

Memphis real estate investor Chris Wark leased his rental home to the same woman for seven years. She was a school teacher, who apparently had a hard time throwing anything away. 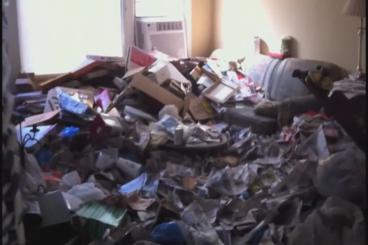 After asking the woman to move out, Wark posted a home tour of the shocking scene on YouTube. That video went viral.

In the living room, there was a sea of garbage that goes up to his knees. Wark does not know why his renter simply stopped taking out her trash, when her cats gave up on using the overflowing litter box, or how she managed to live in the bug-infested home.

“I feel like bugs are crawling up my pant legs,” said Wark in the video he posted on YouTube. “It smells super gross in here, um, I’m going to try not to throw up on camera.”

Flies swarmed above the kitchen counters lined with bottles full of urine, which brings WMC-TV to the most disturbing room in the house – the bathroom.

“We have some sort of monument she has erected of toilet paper and feces,” he described. “The toilet is buried under a mound of feces and toilet paper.”

Even the bathtub was blackened by debris.

The only surface not covered in clutter, was the bed in which she slept.

“She knew she had emotional problems, which she admitted to me,” Wark told WMC-TV.

In the end, she walked away from all of it, leaving the mess behind.

Wark had to hire professionals with hazmat experience to clean up.

“They were here all day long. They took three trailer loads of garbage,” Wark said.

Along with the trailers full of garbage, the home took two more days to decontaminate and $10,000 to renovate.

Wark kept in touch with his former tenant’s family. She checked herself into a mental institution and he is grateful she is getting the help she needs.

“I mean, I just hope she gets better, you know, I really do,” he said. “Even though it was tragic, and it cost me a lot of money, it still reminds me that my life is pretty good. The fact that I could afford to fix the house, that’s a blessing too.”

He admits that this mess was partially his fault and that he should have made more frequent inspections at the property. Wark plans to be more vigilant with his new tenants who are about to move in. He is unsure if they have seen the YouTube video.