Two Chester, N.S., women are frustrated with a long and difficult dispute with a man they say is a bad tenant.

Gail Smith, who owns the waterfront home in Chester, said she had a bad feeling early on about her tenant, Gary Wright.

“This man, from the get go, was not honest. He was supposed to put the power in his name and he didn’t,” Smith told CBC News on Wednesday. 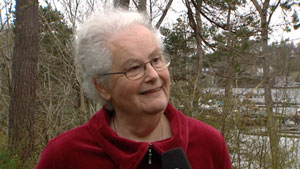 “He used the oil in the tank until the tank went dry, and I thought he was paying the power bill. But suddenly I had the power bill and a disconnect notice.”

She said she has his belongings moved to her garage at her own expense. Those items have now been in van der Lugt’s garage for seven months.

“We don’t want him to get his stuff now because that’s the only way of getting at least some money back from this man and that’s the way it is,” said van der Lugt. “We actually want to have a Storage Wars in Chester so, bid on it and pay the lady.”

Wright, who is blocking the sale of his belongings, did not respond to requests for an interview.

The case is scheduled to return to small claims court in June.

Smith said she has been so put off by the entire experience, she plans to put her waterfront home up for sale once she gets rid of Wright’s boat — which has been sitting on the home’s front lawn.

“I feel like I’m a criminal. I’ve got to go to court and defend myself and my actions. It’s demeaning and it’s embarrassing to have that type of person take one to court,” she said.

“One sort of goes into this trusting that the tenant will look after the house and live in it in an appropriate manner.”