Okechukwu Emeka, a tenant at 131, Uzo Street, Ajegunle, Southwest Nigeria,  has allegedly clubbed his caretaker and car dealer, Francis Ogboh, 65, to death during a disagreement over payment of electricity bill.

TrendsNigeria investigation revealed that Okechukwu Emeka, 27, had supported a housewife called Evelyn, who owed the bulk of the debt, during a quarrel. She is believed to have come from the same village in Ngbodi, Imo State, Southeast Nigeria with Okechukwu and allegedly started the fight while the suspect took sides with her. 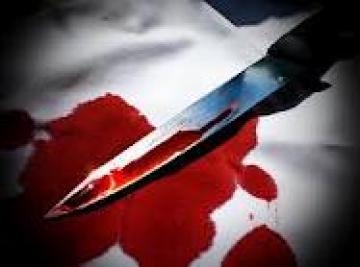 According to the deceased’s son, Chigozie, his father returned from his village in Anambra State on a Friday and found out that PHCN had disconnected electricity supply to the compound because tenants were owing it a huge sum of money.

An argument that led to a quarrel ensued. The matter was reported to the police and Evelyn promised to pay in three days, which was a Monday. She did as promised.

But on her return from the police station, Evelyn allegedly visited her anger on thecaretaker’s wife known as Mama Chigozie.

“Madam Evelyn stopped my mother at the corridor and slapped her. And a fight ensued. I tried to stop them but Okechukwu came out with a knife. He stabbed me on my hand and threatened to kill me. With my blood soaked hand, I went to Okechukwu’s friend to beg him to intervene,” Chigozie explained.

As the fight continued, Ogboh tried to stop it but Okechukwu allegedly picked a stick and hit Ogboh on the head. He started bleeding profusely.

Chigozie further narrated: “the noise that followed the attack made me to rush back into the house where I saw my father lying on the floor, with blood gushing out of his head.”

Neighbours rushed Ogboh to Sones Hospital at Wilmer, Apapa where he eventually died.

But Okechukwu told TrendsNigeria he acted in self defence and did not intend to kill the deceased.

He said Ogboh’s wife and son were beating him so he picked the stick to defend himself.

But unfortunately, the caretaker came into the scene when he held the stick to scare his wife and son. And he was mistakenly hit instead.

When the case was reported at Ajegunle Police Station, Evelyn and Okechukwu were arrested.

After the preliminary investigation, the case was transferred to the State Criminal Investigation Department, SCID, Panti, Yaba, Lagos.