Tenant, 83, arrested on suspicion of murdering landlord, 60, in dispute over £1,000 rent payment

An 83-year-old man was arrested in suspicion of murder yesterday after he allegedly stabbed his landlord following a long running dispute over rent.

A frail man was seen being helped into the back of a police van with his walking stick.

Mr Bithrey was the landlord of properties at Escott Court, where the incident took place.

He had previously been involved in a legal dispute with a man who is believed to be the suspect who was detained by police.

Residents claim they overheard a heated row with shouts of ‘I’m not paying for work that’s not done’ followed by ‘Oh my God, he’s stabbed me in the neck’.

Police cordoned off the area around the modern flats in Chilton Street yesterday following the incident. Forensics are still at the scene today and a tarpaulin is covering several vehicles.

A resident, who declined to be named, said he tried to help.

He said: ‘I heard shouting and when I ran out I saw feet between two cars. 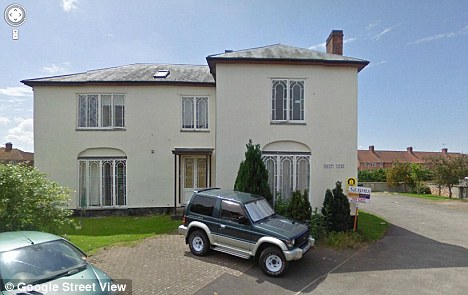 Mr Bithrey, who died after the altercation, was the landlord of properties at Escott Court, pictured, in Bridgwater, Somerset

‘A man in overalls rang the police but I later heard him say he couldn’t stop the blood.’

Mr Bithrey is a former town councillor and a well-known businessman in East Devon.

The married father-of-four and grandfather owns Bithrey Holdings, based in Bithrey House in Honiton.

Residents in the area have been shocked by the death but said many people have had disagreements with the landlord in the past over rent and carpark charges.

One resident said he was shocked to see so many police and paramedics on his doorstep when he popped out for a cigarette.

He said: ‘There was a guy who was covered in blood being put into an ambulance. It was like all hell had broken loose.’

Dan Tottle, who lives nearby, said: ‘I heard a loud noise and saw ornaments shaking in my home. I then saw the helicopter fly in and a man was taken away on a stretcher.’

A spokesman for Avon and Somerset Police said: ‘Police were called to reports of an altercation in the Chilton Street area of Bridgwater this morning at about 10.50am.

‘The area has been cordoned off pending an examination by crime scene investigators.’

They said a man in his 80s had been arrested on suspicion of murder and was still in custody.

They said a post-mortem was to be carried out this afternoon.