A spat between a man staying at a Quincy lodging complex and the woman who runs it has gone viral, with commenters trying to decipher what really may have happened between the two.

According to the person who posted the video, Cathy Tretola, the property owner, was allegedly pretending that she was attacked by the tenant once she noticed he was recording her during an argument. 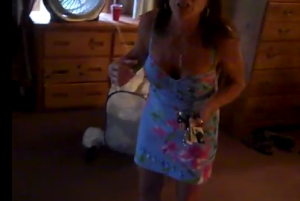 In the video, the woman, who is reportedly Tretola, claims that the man filming her “raped” her and hit her. Two men are also seen in the video consoling her.

The incident is the last three minutes of a 15-minute fight, according to the person who recorded it, so it is uncertain what may have led to the argument escalating and to the confrontation between both parties.

However, during the video, Tretola claims the man recording was “peeing out of the window.”

The video was first posted in July, but only recently went viral after users of 4Chan and Reddit brought it to the surface and began commenting on it online.

Within hours on Monday the video was featured on dozens of message boards and garnered thousands of comments about what may have taken place. The video also went from 300 to 60,000 views in the matter of a few hours.

Tretola allegedly runs the Brookside Manor in Quincy, which describes itself as “the finest lodging in Quincy” on its website.

The rooms at the Manor can be rented from $160 to $220 per week for single occupancy, according to the site, which calls the rooms “executive lodging at a reasonable price.”

Commenters who stayed at the manor in March said Tretola was “as sweet as pie,” but remarks by other users, including the man who took the video, indicated otherwise, according to the reviews.

A person who submitted a post to Yelp in August claimed they came home one day to find the owner going through their drawers.

BostInno also called the manor, but the line was busy all day. After several more attempted calls an answering machine picked up, however, it would now allow you to leave a message.

A spokesperson from the Quincy Police Department said no one was available on Monday to speak about the video, or if a report was filed about the attack and Tretola’s allegations. A spokesperson said to call back on Tuesday.