Triumph Property Management in Las Vegas hears a lot of horror stories from landlords with self-managed properties. This award-winning management company often steps in after things have gotten out of control for DIY landlords.

In an effort to educate landlords of the perils associated with poorly-managed properties, Triumph has compiled a list of the Top 10 Worst Tenants in America. These pictures speak a thousand words. 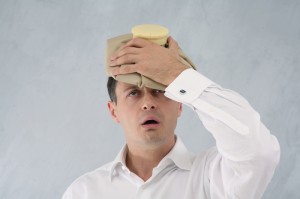 This anecdotal list provides a shocking chronicle of the flotsam left behind from exceptionally bad tenants.  What is not apparent from the descriptions is how much each of these wrecks cost the landlord.

Take, for instance, the tenant dubbed “Vincent Van Go Poop”, or one who kept a stable of horses in a residential neighborhood. In one photo, it’s what you don’t see that counts. Another tenant allowed a homeless man to set up camp on the back porch, complete with a bucket toilet. In a picture of the remains from a hoarder, it is hard to notice that a hundred cats lived in the unit at the same time.

The list gives every landlord a chance to see what it would be like to open the door of their rental property and find they’ve rented to one of the country’s worse tenants.

1. If you can’t take the heat, steal the stove out of the kitchen.

Tenant who lived in this apartment for only 6 months decided that they would take the stove as a souvenir of their stay. Maybe it cooked really good mac and cheese?

The inside of this medicine cabinet apparently functioned as a mood indicator…..

This enterprising tenant decided to sub-lease the outside patio of their apartment to a homeless person. Not shown in picture: The 5 gallon paint bucket that served as the toilet and the full sized kitchen stove that was set up, complete with gas that was being piped in from the kitchen.

When this tenant moved out, the property owners were forced to rent a full sized industrial trash container in order to fit all of their “junk” in. Nobody has any clue as to what happened to the bottom of this couch.

Hulk, Angry! Hulk smash kitchen sink! After Hulk took his anger out on the kitchen sink, he then turned his attention to the bathroom door, proceeding to rip if off its hinges. For his grand finale, the Incredible Hulk ripped out the innards of the toilet, thereby rendering it unable to flush

This aspiring artist left some “artwork” on the bathtub shower curtain and bathroom wall.

The property owner suspects this tenant was an aspiring super villain, and was attempting to feed and breed an army of cockroaches behind their refrigerator. Most likely they were attempting to breed an army of super cockroaches to march down Main St. and wreck havoc upon the city…..but fortunately for everyone the tenants were evicted before their evil plan was carried out.

The city of Phoenix, Arizona is smack dab in the middle of the desert. In the summertime, temperatures can reach upwards of 110 degrees in the middle of the day. In that kind of heat, not too many animals can survive….unless you’re a tortoise or a lizard. This tenant apparently (according to the reports we received from their neighbors) kept horses in the backyard of a residential house. The picture below represents ~5lbs of the over 500lbs of horse poop that needed to be cleaned up from the backyard of this ex tenant.

The tenants of this house were evicted after the neighbors called the landlord complaining of a “chemical” kind of smell. After the cops were called, a fully functional meth lab was found in the basement of this house.

While there is nothing new about hoarders, this case is particularly unique. The tenant was said to have over 150 cats living indoors.