Better an empty house than a bad tenant . . .

He only gets to stay there five weeks a year but when he has the keys he wants to make sure he gets the full run of the place with all facilities working. Sometimes, though, his co-owners want him to go easy with certain aspects of the property. At other times, he gets there only to find the villa is run down or perhaps completely uninhabitable. 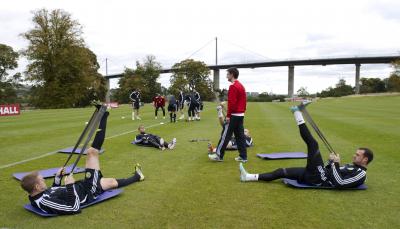 Such is the life of an international football manager. Craig Levein only gets to be in charge of the Scotland squad on a handful of occasions each year but when he gets the group together he wants them to be at their peak fitness and available to feature as and when he needs them. There are other factors that need to be considered, though. The clubs, who pay the players’ wages and therefore command a greater say in how they are used, often view an international break as a chance for their assets, if they have been struggling with injuries, to rest and recuperate. The player himself might not feel physically ready to play.

It can leave international managers facing something of a frustrating dilemma. Levein knows that Scotland must emerge from this World Cup double header against Wales and Belgium with a couple of decent results if they are to retain any chance of qualifying for Brazil 2014. Four points should probably be the minimum target after two disappointing home draws with Serbia and Macedonia.

Scotland’s chances would improve if Levein could select Scott Brown and Darren Fletcher for both games but that may not be as simple as it sounds. Brown has been used sporadically by Celtic this season as he nurses a hip injury. The midfielder did not play in his side’s victory over Hearts on Sunday and it seems hard to envisage him playing two highly competitive international matches in the space of five days, even if the player himself, as ebullient as they come, yesterday insisted it was definitely not out of the question.

Neil Lennon had suggested Brown play in only one of the two games, and Levein will need to absorb input from the player, his club manager, as well as medical advice before deciding how to use the midfielder. “It’s brilliant to see Scott here and he’s saying he can play in the two games,” said Peter Houston, Levein’s assistant. “But that’s Broony. If he’s selected for Friday night’s game, it’s his body, he’ll know how sore he is. But we’ll be very, very careful.

“If he’s not played two games in three or four days for Celtic, it would be a big ask for him to do it for Scotland. He is so keen and enthusiastic but we have to monitor him and see what his recovery is like. It’s all right saying he can play both games but we have to make sure he’s 100% before the manager could even think about selecting him for two games.

“Neil Lennon has already said he thinks he’ll be okay for one game and we’ll respect that. We must respect the fact we have to look after the boy, whether or not he is keen to play in the two games. Craig has a good relationship with all the club managers and they know that he won’t overuse or abuse them, especially the players who are just coming back from injury or illness.”

Darren Fletcher is another slowly working his way back to full fitness and who also needs to be handled carefully. The captain is in the squad for the first time since recovering from a debilitating bowel problem that troubled him for 10 months and at one point seemed to be threatening his entire career. He has been welcomed back with open arms. “Darren has been out for a while and it’s fantastic that he is back,” said Houston. “He is a quality player who has performed at the highest level in the Premiership, Champions League and for Scotland over many years. If the player is saying that he is 100%, then Craig will play him.”

It has been another Fletcher, Steven, who has been garnering most of the headlines recently. Houston insisted it was not written in stone that the Sunderland striker would start against Wales on Friday, but conceded his form meant that there was a more than decent chance. “That is something we have to look at,” he said. “He is a guy who is in form and has been scoring goals at the top level. It is something we will be speaking about but we have not spoken about the team and who is going to start here or there.

“Steven has done himself a favour, though, with the amount of goals he has been scoring – five in six Premier League matches. That is certainly a decent record.”

Wales have endured a horrible start to the qualifying group, losing both their matches, but Houston believes they are still a force to be reckoned with. “Wales have players in Aaron Ramsay and Gareth Bale who could play at any level,” he said. “They had a wee changeover with suspensions and injuries and they miss the quality of Craig Bellamy who is very influential. For small countries, when their top players are out, it makes it a bit more difficult.

“Chris Coleman is probably still getting to know his squad and no matter how well they have started or not they will be difficult opponents. We beat them the last time we played them in the Carling Nations Cup but it was a tough, tough match. They will be hurting from the fact they lost heavily against Serbia and sometimes a wounded animal works a bit harder.”

This article originally appeared on heraldscotland