A Commack woman has confessed to stealing cash and jewelry from a tenant living in her basement apartment, Suffolk County Police announced on Tuesday. 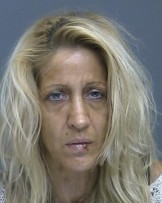 Police arrested Christine Georghakis, 45, on Sept. 1 and charged her with second-degree burglary after she admitted to stealing from her tenant’s apartment in her 12 Johnson St. home’s basement. Georghakis, who also goes by her married name, Christine Matarazzo, said she used her key to enter the apartment.

Police also said Georghakis had a prior arrest for a similar crime, but did not give any further details.

Georghakis was arraigned in the First District Court in Central Islip and is being held on $5,000 bond.

This article was written by Henry Powderly and originally published on commack.patch