A fraudster who cloned his landlord’s identity and then used it to sell his £300,000 house from under his nose has been jailed for three years.

Francis Vaughan’s scam was attempted on a property in Derling Drive, Raunds, when he moved there in August 2010. If it had succeeded he would have netted £175,000. 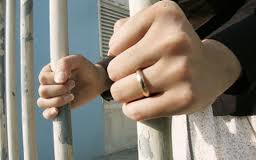 He took the identity of the owner of the property, Nigel Hodgson-Jones, and sold the house but the money had not reached Vaughan before police moved in.

Vaughan had already used the fraud to get £300,000 for a house in Woburn, Bedfordshire, Luton Crown Court was told on Friday.

He would then rent the property, paying six months rent in advance. This gave him time to create the false identity of the landlord, get a driving licence in the false name and gather utility bills to support mortgage applications and satisfy solicitors that the transaction was lawful and genuine.

For the Woburn house, a month after moving in, in January 2009, he had changed his name by deed poll to Ross Scott Beatty – the name of his landlord who owned the property.

He opened online accounts with Halifax using the false particulars and by June 2010 had ‘sold’ the house to a company in Durham that buys properties cheaply, for £176,000 cash. They in turn sold it for £300,000 to a completely innocent purchaser, said prosecutor, Beverley Cripps.

Within two weeks Vaughan had converted the cash to five bars of gold bullion.

The fraud came to light in September 2010 when the original owner was checking on the property, as he had been unable to contact his tenant, and found a gardener working there.

He said he was working for the new owner, and police were informed.

In October Vaughan had moved into a property in Newmarket, worth at least £200,000, but the fraud was in its very early stages when police discovered what was going on.

Vaughan, 32, a former semiprofessional footballer and England Under-18 athlete from Brickhill, Bedford, pleaded guilty to three charges of fraud by false representation, one of converting criminal money into gold bullion and one of stealing furniture worth £9,000. He was jailed for three years.

With him in the dock was 32- year-old Carl Aldridge of Marston Moretaine, Beds, who pleaded guilty to fraud and three charges of converting criminal property.

He was jailed for 10 months.

His criminality involved his name being used with fake details to obtain the mortgage for Derling Drive and converting £26,000 he received from the deal.

Judge Stuart Bridge told Vaughan: “This was a sophisticated and highly professional identity fraud.” Proceedings are ongoing to recover proceeds from the crimes.

This article originally appeared on northampton-news