Landlord stabbed in leg during eviction

The landlord of the Terrance Apartments on Rosemead Avenue in Kelowna is in hospital with a stab wound to the leg suffered during a bailiff ordered eviction Wednesday morning. 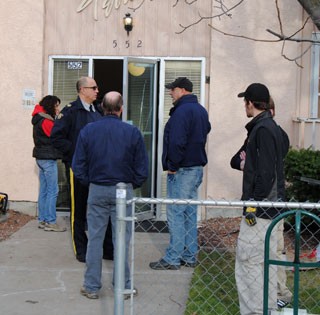 Mike Zuber, with North Central Bailiffs, says he was in the process of executing a court ordered writ of possession to evict the tenant when the incident transpired.

“The tenant was cooperative and, as I stepped outside to take care of my files, the landlord was in the hallways talking to another tenant when the tenant in question allegedly came down the hallway, had a confrontation with the landlord and stabbed him in the leg,” says Zuber.

“I didn’t hear anything, but apparently there was an exchange of words and then the next thing I heard was the landlord indicating he had been stabbed.”

The landlord was stabbed in the upper thigh on the inside of his left leg. The injuries appeared to be non life-threatening.

The tenant, who is in police custody, apparently shared the apartment with a female resident who was searched and interviewed but, according to police on scene, was not arrested.

The suspect was apparently being evicted for non-payment of rent.

Jake Polzin was in the process of moving items from the apartment when the stabbing took place.

“I was in room 101 and he (suspect) was coming towards me with the knife open but he had no look to him at all. He was out of it,” says Polzin.

“He just attacked him for no reason. It was bleeding pretty good. We had to put a compress bandage on him.”

RCMP Sgt. Brad Swecera says a knife was recovered from the scene.