A THREE-day search of a property at Warriewood has ended with the tenant being charged with a string of drug charges.

Police say they seized drugs with an estimated street value of more than $80,000 and also seized precursor chemicals used for making the drug ice, and unlicensed firearms. 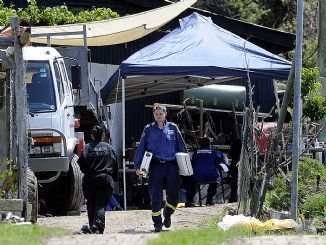 The search of the large property and numerous buildings on it lasted all of Thursday and a large part of Friday.

He said they also found a white crystalline substance that has been sent for analysis, and an assortment of bladed weapons, unlicensed firearms and cash.

“We also found evidence of a homemade clandestine lab on the property used for making drugs,” he said.

“We are investigating the suspected manufacture of drugs on the property and more charges are anticipated.

“The search warrant was executed as part of an ongoing investigation into the supply of drugs on the northern beaches.”

Insp Wonders said the police had to call in RSPCA inspectors to care for livestock on the property, including cows, pigs and chickens.

“We had to ensure the livestock was well-fed and well-watered, and kept in good health throughout the three-day search,” he said.

The 39-year-old tenant of the property has been charged with two counts of supplying an indictable quantity of drugs, two counts of possessing drugs and two counts of dealing in the proceeds of crime.

Insp Wonders said the firearms had been sent for ballistic examination and that firearm charges are likely to be laid.

The man will appear in North Sydney Court on January 9.

This article was written by John Morcombe  and originally published on manly-daily.whereilive