Woonsocket Police arrested Thomasina Fannings, 33, of 180 Avenue C, apt. 1, Nov. 30 for responding to her landlord’s request for back rent by spitting on him and striking him in the face with her shoe. 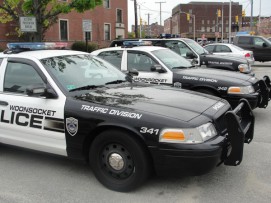 Thomasina began yelling at him, Mongeon said, replying that she would not give him the money, which, she said, wasn’t due till the next day. Mongeon said he tried to explain he was asking for past due rent, and that he would like at least part of the overdue amount, but Thomasina continued her verbal abuse, at one point telling him she would beat him.

Mongeon left the apartment and got into his car, closing the door which had a partially open window. Thomasina, who had followed him to the car continuing her tirade, spat at him through the open window, connecting with his face and partially with the window, then removed one of her shoes and struck Mongeon on the left side of his face. Mongeon immediately called police, according to the report.

Officer Daniel M. Lajoie spoke with Thomasina, who only added her complaint that Mongeon should’ve waited till the next day to ask her for the back rent. She said Mongeon did not assault her. Lajoie asked if there was anything else she wanted to add, and she said no.

Lajoie arrested Thomasina and escorted to the cruiser, during which she asked what she was being arrested for. When Lajoie told her she was being charged with simple assault, Thomasina contradicted her earlier statement, saying that Mongeon had assaulted her, she said.

Lajoie reminded Thomasina of her right to remain silent. She was processed at the station with out incident.

This article was written by Rob Borkowski  and originally published on woonsocket.patch