A Saginaw man remains jailed on charges that he raped a woman earlier this year. 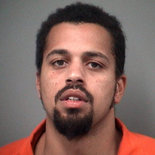 Watkins lived at 1036 S. Jefferson, a house split into apartments, police said. A female tenant had a friend visiting her, and after his initial advances were rebuffed by the guest, Watkins later raped the woman in the house, police said.

He then stole a cellphone from another female at the house, police said.

In arraigning Watkins on Jan. 16, Saginaw County District Judge Terry L. Clark entered a not guilty plea on his behalf and held him on a $100,000 bond.

Watkins is scheduled for a Jan. 30 preliminary hearing before District Judge A.T. Frank.