The expected plea from a man accused of killing an Indiana woman and leaving her body in the parking garage of a casino was delayed Friday so he could work with a specific attorney he knows in Chicago. 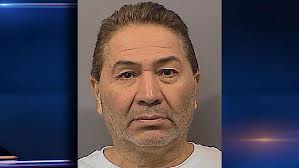 The judge set a “determination of counsel” hearing for May 31.

Ralph Martinez, 57, is accused of kidnapping and murdering Mary Austgen, an Indiana business owner found dead last month in the parking lot of the Majestic Star Casino in Gary.

Investigators say Martinez, a former tenant of Austgen’s, was evicted a year or two ago, but authorities said they weren’t sure what his motive was in the slaying.

Martinez was taken in for questioning last week after executing a search warrant at a home on the 12200 block of South Lawndale Avenue in Alsip, Ill. His arrest came days after officials announced a $10,000 reward for information leading to the arrest and conviction of Austgen’s killer.

Austgen, 76, was found inside her white 2011 GMC Yukon Denali in the casino parking garage in the early morning hours of March 29.

Security cameras hours earlier recorded a man at the woman’s place of business, Austgen Electric. Officials said Austgen was attacked at the business, in the 800 block of East Main Street, in Griffith, and then kidnapped at gunpoint.

Police said he stole $3,000 and jewelry from Austgen.