Markeletta Wilson started searching for a new apartment as soon as she qualified for a Section 8 voucher. She had been living with her daughter and grandson in a basement apartment in South Seattle and needed an apartment with more space. When Wilson applied for an apartment in Renton, she was shocked by the response: The rental company rejected her application because of a decades-old drug possession. 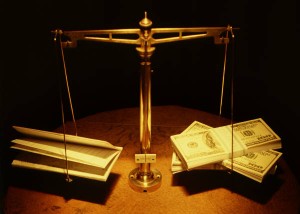 “I had forgotten all about it myself,” Wilson said. Convictions older than seven years are off-limits to background check companies, according to state and federal law. RentGrow and other tenant screening companies often use the information anyway, according to the American Civil Liberties Union (ACLU) of Washington.

The ACLU has filed a lawsuit against RentGrow on behalf of Wilson. ACLU attorneys say a number of people have had similar experiences and they expect this could become a class action lawsuit.

In Wilson’s case, RentGrow recommended that the property management company reject her application based on drug possession felonies that occurred in 1989 and 1995. Wilson had done her time and paid her court fees, but decades later the system continued to judge her for past actions, said Wilson’s attorney, Vanessa Hernandez of the ACLU.

The background check industry has boomed over the last decade. Following the terrorist attacks of 9/11, employers and landlords increasingly relied on background checks. The ease and access of the Internet fueled the industry’s demand for information. Around the same time, courts started making their files accessible online.

“It’s getting a lot cheaper and a lot faster,” Hernandez said. “It is virtually uniform in employment and in housing for background checks on everyone.”

Sixty years ago, companies would use background checks sparingly, for a few high-level hires, Hernandez said.

“It was time consuming; it was expensive,” she said.

Background checks are big business, according to a report from the National Consumer Law Center. In one decade of operation, employment screening company ChoicePoint’s annual revenue grew from $400 million in 1997 to $1 billion in 2008.

Often, however, it’s not the full picture.

Eric Dunn, an attorney at the Northwest Justice Project who specializes in background checks and tenant screening, said screeners don’t look at the results of a trial or an eviction notice. They just log whether the files exist.

“SCOMIS wasn’t designed to be a de facto credit report,” Dunn said. “It was designed for clerks to keep track of their dockets and case records.”

No one knows for sure how many screening companies there are in the country. The Consumer Data Industry Association, a trade group for background check organizations, has more than 200 members but there are likely many more.

“You could literally start one of these up in your garage,” said Jonathan Grant, executive director of the Tenants Union of Washington State. “There’s no licensing for these companies; there’s no true oversight.”

The lack of oversight of tenant screening companies makes it difficult for someone like Wilson to fix her record. By federal law, she can ask RentGrow to do an investigation and make corrections. But by then the apartment she wanted will likely be gone, and the next landlord she contacts could use an entirely different screening company.

Landlords often charge would-be renters $50 to $100 for background checks, regardless of the outcome.

“It’s the only example I can think of where you’re asked to buy something that potentially harms you, but you have no opportunity to fix it,” Grant said.

Wilson eventually found housing at an apartment complex in Kent, but now she makes sure to mention her criminal convictions. She told the property manager about her criminal record right away, with a reminder that the 18- and 24-year-old records cannot be used to determine her eligibility.

This article originally appeared on  realchangenews