Landlords from hell guilty: According to a UPI report from June 20, 2013, the couple known as the “landlords from hell” have pleaded guilty to several felonies after they used outlandish tactics to force tenants out of their homes unlawfully. 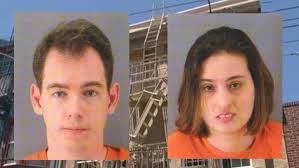 Reports say the couple have accepted a plea deal which will result in both parties serving prison sentences. Nicole Macy, 37, and Kip Macy, 38, went “to scary lengths to drive tenants from a San Francisco apartment building — including cutting holes in one tenant’s floor with a power saw while he was still inside,” reports say. It didn’t stop there either. The landlords from hell also changed locks, threatened to shoot tenants, removed personal belongings from apartments, and even “reported tenants as trespassers in their own apartments.”

Why would these “landlords” do such a thing to their tenants? Apparently it was all in an effort to bully people out of the building, so they could then rent to new tenants at a higher price. Prosecutors say the increasingly pricey South of Market neighborhood had seen rental property rates increase significantly, but city restrictions kept the Macy’s from raising rent on existing tenants.

The couple decided to take matters into their own hands from 2005 to 2007, when they started threatening tenants by saying they would have them deported, or by shutting off their utilities and changing locks. District Attorney George Gascon released a statement wherein he calls the couples actions “so outlandish and brazen that it sounds like the plot line of a horror movie.”

The Macy’s had fled to Italy in 2009 after a grand jury indictment, but were extradited and reached a plea deal that will see each “sentenced to four years and four months in prison.”

What are your thoughts on these landlords from hell? What would you do if your landlord, did to you, what the Macy’s did to their tenants?