A spokesman for the Metropolitan Police Service said officers were called to Strathleven Road at approximately 9.50am. Following reports of a shooting in the street an armed response unit was sent to the scene. 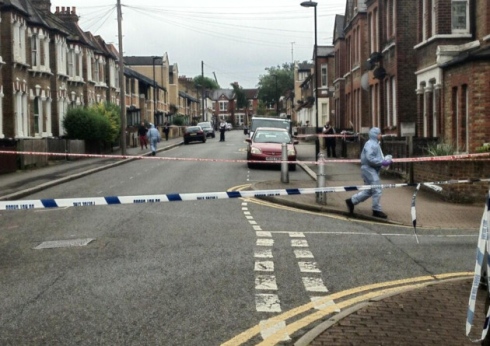 The spokesman said a man and a woman were injured and were taken to a south London hospital by helicopter after the London Air Ambulance landed in amongst houses.

He said their conditions are unknown but they are not thought to be life-threatening. The pair are believed to work for the Metropolitan housing association, which manages properties in areas including Lambeth, Hackney and Haringey.

A spokeswoman confirmed that the female victim was an income officer with the organisation. Police said a man had been arrested following the incident.

The Met spokesman said: “A short time later, armed officers forced entry to the suspect’s property in Strathleven Road and restrained a man. “He was unarmed. A firearm has since been recovered from the address.

“The man was arrested and has been taken to south London police station where he remains in custody.”

Police confirmed inquires are ongoing into the incident and the road has been cordoned off for forensic teams to collect evidence.

A London Ambulance Service spokesperson said “a man reported to be in his 60s and a 59-year-old woman” had been treated for gunshot wounds and taken to hospital as priorities.

“Our whole community will be deeply shocked by this terrible incident, and everyone living locally will be wishing those who have been injured a speedy recovery,” he said.

The shadow business secretary, whose constituency includes parts of Brixton, added: “It is very important that those who provide housing and related services can do their jobs without living in fear, never mind without suffering extreme violence of this type.

“I have been in contact with the police since this incident occurred, and I know the investigation into what has happened is proceeding at pace. My thoughts will continue to be with those who have been injured.

“This is a sad example of the clear need to rid our society of guns and the scourge of gun violence.”