A man has been charged with three counts of attempted murder after two housing officials were shot in Brixton trying to evict a tenant. 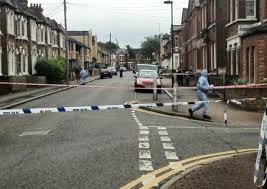 Andrew Stephenson, 50, of Strathleven Road, will appear at appear at Camberwell Magistrates’ Court today to face seven counts in all, including ‘possession of a firearm with intent to endanger life’.

The charges come after a 59-year-old income officer for Metropolitan Housing was shot in the knee after entering a property in Strathleven Road on Wednesday morning.

She was accompanied by a bailiff, also 59, who suffered gunshot wounds to the hip and leg.

A spokesman for the Metropolitan Police Service said yesterday both were taken to a south London hospital for treatment where they remain in stable, non-life-threatening conditions.