A 35-year-old man has been arrested for allegedly throwing a punch which landed on the face of his neighbour, killing him instantly.
The suspect, Emmanuel Dugbenu, was apprehended at his residence at Abeka, after the neighbour, identified as Old-man Kofi, 45, was pronounced dead at the Korle-Bu Teaching Hospital (KBTH). 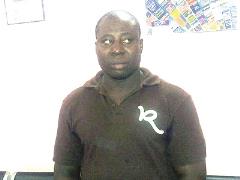 Dugbenu, who works as a supervisor at the Royal Gold Casino in Accra, was said to have punched the face of Kofi during a hot argument. Briefing journalists in Accra yesterday, the Accra Regional Crime Officer, Chief Superintendent of Police, Mr Frank Adufati, said Dugbenu and Kofi were co-tenants.

On July 6, 2013, Dugbenu returned home from work and found that his television pole had been pulled down. According to Mr Adufati, Dugbenu suspected Kofi, who was then not at home, to be the person who might have pulled down the television pole.

Kofi returned home at 6 p.m. on that day ­­­­drunk, and the suspect confronted him. Angry and could no longer exercise restraint, Mr Adufati said Dugbenu threw a punch which landed directly on the face of Kofi.

The suspect left Kofi lying on the ground. When the other co-tenants woke up the next day, they saw Kofi still lying on the compound. Mr Adufati said he was rushed to the KBTH, but was pronounced dead on arrival. Dugbenu was subsequently arrested. He is currently in police custody pending further investigations into the matter.

This article originally appeared on ghanaweb