The country’s murder toll now stands at 227 following the death of businesswoman Vidya Persad. Persad was beaten to death close to her home yesterday on Moulla Trace, Aranjuez. 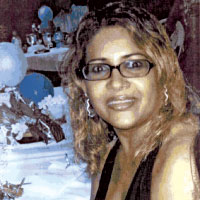 According to police reports, the 45-year-old who travelled regularly between Barbados and Trinidad and Tobago, had gone to collect her $2,100 monthly rent from a tenant who had only paid once since moving in the area a few months ago.

Police said Persad was in the process of putting the tenant out of the apartment when they began arguing around 10 a.m.

The man, who is believed to be in his late 20s, picked up a hammer and struck her, following which she collapsed and died on the scene.

Residents who flocked to the area following news of the death were heard talking about how many times Persad had attempted to collect rent from the man.

The residents said following the killing, the man went to a nearby doubles vendor and was seen brandishing the murder weapon and trying to incite the vendor.

He then left, throwing the hammer in a nearby abandoned lot where it was retrieved by police.

Speaking with the media at the murder scene, Persad’s niece, Savi Durga, said her aunt had tried many times to get the tenant to pay the rent. She said her aunt lived in Barbados and would be back and forth on business.