Hospitalized suspect charged with murder, arson: Johnny Williams, identified as the tenant in the building’s first-floor apartment, was charged Sunday with second-degree murder and first-degree arson among other charges in Saturday’s fatal fire in Wilmington. 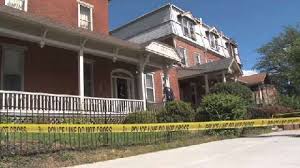 Jose DeJesus, who died in a fire in Wilmington on Saturday that was determined to be arson, wore two leg braces and walked with a cane.

People in the city’s Hilltop neighborhood always wondered why he lived in the third-floor apartment at 1118 W. Fifth St., his home for decades. Wouldn’t he be happier on the first floor, neighbors asked him, so he could at least spend parts of his days sitting outside on the front porch?

“He wanted the top floor,” Vivian Garcia said. “He said he could see the whole neighborhood that way – and talk to more people.”Johnny Williams, identified by neighbors as the tenant in the building’s first-floor apartment, was charged Sunday with second-degree murder, first-degree arson and three counts of first-degree reckless endangering, city fire officials said.

DeJesus, who was in his 60s, rarely left his house. When he did, it was usually for a doctor’s appointment. His daughter would usually pick him up for the medical visits and help him to the car. His daughter and neighbors, such as Garcia, would bring him food and help him with his laundry.

Even though he was virtually homebound, he was known to nearly everyone on the block, from his talks with them from his third-floor window.

“He was very religious, and he blessed me every time I walked past,” said Waleska Negron said. “He was always blessing everyone who walked by.”

The fire started around 1:45 p.m. Saturday. Three row houses in the block were damaged by the blaze. The two-alarm fire gutted the first floor of the home at the corner of West Fifth and Harrison streets where DeJesus lived.

Flames were shooting from the windows when firefighters arrived. They carried DeJesus down a ladder from a third-floor window. He was pronounced dead at Wilmington Hospital.

Garcia said she will miss visiting Garcia in his apartment and talking with him in the window.

“He did almost everything from there,” another neighbor said. “If he wanted cigarettes, he would put money in an empty pack, crinkle it up and throw it down to us so we could go the store for him and buy him a new pack.”