Building manager had concerns over trafficking in death suite

A former manager of Surrey’s Balmoral Tower said she asked Ed Schellenberg to service the fireplace in suite 1505 instead of his young nephew Zach because she was concerned about the tenants inside. 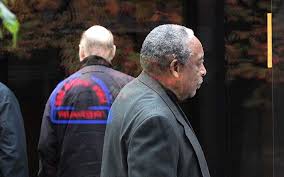 Tracy Carothers said that on the day of the Surrey Six murders, she ran into three Asian males on the 15th floor who were visiting 1505 and had a brief conversation with the tenant, who she knew as Chris Baldini.

“I had mentioned to Ed that I didn’t think it would be a good environment for Zach because the young men were of questionable behavior and I just felt that Zach was young and it was not a good environment for him,” Carothers told B.C. Supreme Court Justice Catherine Wedge on the second day of the Surrey Six murder trial.

Carothers said Schellenberg, who was shot in the head with five others on the afternoon of Oct. 19, 2007, told her that he would work in 1505 and sent Zach, then just 21 and in his first week on the job, to do two other suites on the floor.

Carothers said she heard Schellenberg knock on the door of 1505 as she was walking away towards the elevator.

That was the last time she saw him or the young men inside the suite that she had suspected were drug traffickers.

Carothers, who along with husband Norman retired as managers last June, testified that before the Surrey Six murders, she warned 1505 owner Ceasar Tiojanco that his tenant was likely a drug dealer.

And he said the Crown’s theory of the Surrey Six slaughter is that Lal was targeted by the accused and their Red Scorpion gang because he had been selling drugs on their turf and refused to pay them $100,000 tax.

The other victims – Lal associates Eddie Narong, Ryan Bartolomeo and brother Michael, as well as gas fitter Schellenberg and neighbour Chris Mohan – were killed so there would be no witnesses, Levitz said.

Carothers, the second witness in the case, said she first raised her concerns over the tenants with owner Tiojanco in early 2007.

Then the unit was rented to someone named Sean Corbett, who had been caught with a marijuana grow-op in another apartment in the low-rise section of the Balmoral complex, Carothers said.

“I told him that he had just been busted in a grow-op in Balmoral Court and when the police gave chase, he disappeared underneath Balmoral Tower in an area that could only be accessed with a key fob,” Carothers said. “Within about two weeks, Mr. Corbett moved out.”

The next tenant was Raphael Baldini, who lived with his girlfriend, Carothers said. (Baldini was shot to death in February 2009, which has not yet come out at the trial.)

Then in spring 2007, Carothers was told Baldini’s cousin Chris was moving in.

She said she once watched Chris Baldini meet with someone on a motorcycle in the visitor’s parkade below the tower.

“I guess he got a little upset that I was watching and he had dialogue with me,” Carothers said.

She reviewed records of fob entries from the afternoon of the murders and explained that the fob for suite 1207 was used to get into the parkade at 2:23 p.m. – just before the murders.

Levitz has said a tenant in the Balmoral with links to the Red Scorpions provided his fob to accused killer Johnston just 90 minutes before the bloodbath in 1505.

Carothers said the renter in 1207, whose name is covered by a publication ban, later asked her for a new fob and she refused, telling him to get it from the owner of the suite.

She said that renter, like the tenant in 1505, was “on the radar” for suspicious activity.

“That unit has also had a number of people who were rather shady living in it, including him,” she said.

Earlier Tuesday, Carothers’ husband Norman completed his testimony about finding the bodies of all six victims after his wife became concerned that Schellenberg was missing.

He entered 1505 sometime after 3:30 pm and say the victims lying on the floor.

Norman Carothers said all six victims were wearing hoods over their heads and that he only noticed blood around the heads of two of the men.

“Mr. Schellenberg had a hood over his head and I didn’t see blood,” Norman Carothers said.

He agreed with defence lawyer Mike Tammen that there had been drug dealing and property crime around the area of the Balmoral Tower, which is just half a block from the King George SkyTrain station.

He testified that a parkade sign at the Balmoral which said “premises under camera surveillance” wasn’t accurate because all the cameras had in fact been stolen at the time of the murders.