Landlords learn how to deal with bad tenants 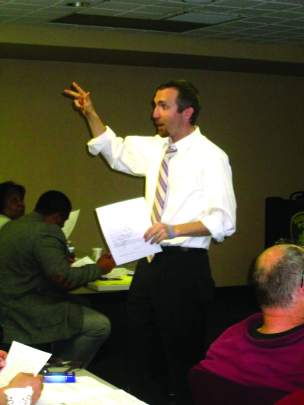 Saturday morning, about 35 landlords crowded into a room at the Dover Police Department to learn how to address tenants’ criminal and nuisance behavior.

The free, 7-hour seminar gave landlords the tips and tools to be proactive about keeping the neighborhood safe. The more informed they are, Mr. Logan said, the stronger the justice system can be.

“I’m not here to step into their thing,” he said. “They are the owners. That’s what they do.”

Other speakers Saturday included landlord Bill Matt, who explained best practices for property owners, and Dover police Sgt. Marvin Mailey, who gave a presentation over lunch about how to recognize and report drug use.

The seminar not only taught landlords how to set rules and address problems, but also how to avoid trouble to begin with.

Mr. Logan said it was important to screen tenants before they sign a lease.

“Screen when you’re standing there like Superman and you can say, ‘No, no, no.’ Because the second you say ‘Yes,’ you’re not Superman anymore,” he told the audience.

“If you pass that key over, it [the property] is no longer yours until the court says it is again.”

He also reviewed the Fair Housing Act. The law makes discrimination based on age, race, gender, and other qualities illegal in housing transactions, but landlords can still evaluate a prospective tenant’s credit, income or criminal history.

“These are the pitfalls. This is what scares the landlords,” he said.

“They get so wrapped up and afraid of lawyers and lawsuits they’re afraid they can’t say no.”

Attendees were given a hand-out, a sample addendum to a rental application. The paper included questions like “[Have you] had a warrant, or currently have a warrant for your arrest?” or “[Have you] been a petitioner in a case at bankruptcy court?” and Mr. Logan showed them where to cross-check the answers.

Joe Burden, who attended the seminar with his dad, a local landlord, said that his father tries to help his tenants and avoids running credit checks.

“He literally sacrifices thousands of dollars,” he said.

“I’ve seen drastic changes over the last 20 years. Now we have to be cognizant about who is coming here and hold people accountable.”

Linda Buckland, who has owned area rental properties for 40 years, said that, over time, she has seen many changes to the Landlord-Tenant Code and ways of interviewing and investigating tenants.

“I’m very impressed with this,” she said of the seminar, adding that learning about “the Internet sites, and how far you can go to check things out” was especially helpful.

The seminar was offered by the city of Dover and the state Department of Justice as part of the city’s “Safe Communities” initiative.

“There are a number of properties where the police responses are disproportionate to what they should be on any given property,” said Ann Marie Townshend, the city director of Planning and Inspection.

To combat that, a city ordinance adopted Monday night requires landlords to use the “Safe Communities Lease Addendum.”

The agreement bars a tenant, any member of the tenant’s household, any guest or other person associated with the tenant from engaging in criminal activity on or within 500 feet of the leased property. Violation is grounds for eviction.

“We’re requiring it, but anyone, as a landlord, can say, ‘If you’re a criminal, you can’t live in my property,’” Ms. Townshend said,

The ordinance also requires landlords to attend the safe housing seminar if their rental permit has been suspended or if police have responded to criminal activity at the property three or more times in six months. The training will be offered twice a year.

Similar sessions have been held in Wilmington, Newark and Harrington. Mr. Logan estimated that more than 600 people have taken the class.