Police has cracked the cold blooded murder case of an old man arresting a tenant and his son, here on Tuesday. During police investigation, both accused confessed their crime and revealed that they killed the old man with a cable wire after a dispute over rent. 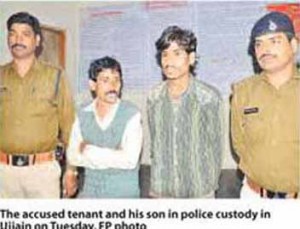 SP Anurag Kumar informed that complainant Manjeet Singh, son of Trilok Singh Dung, resident of Vikram Marg, Freeganj lodged a complaint at Madhav Nagar police station that his father Trilok Singh, 78, son of Santram Chhabra, resident of 33/ 1 Lakshmi Nagar was murdered by some unidentified miscreants on the night of November 30, 2013. Police registered a complaint against unidentified accused under Section 302 of IPC, started probing into the case and came with a surprise that the old man was murdered by his tenants.

Police interrogated deceased’s tenant Premkishore, 48, son of Narendralal Verma and his son Ravi, 21, separately.Both the accused confessed to their crime and revealed during police interrogation that they killed the man by strangulating his throat with a cable wire after they had a dispute with him over the issue of paying rent of the flat.

Police is searching for previous criminal record of both the accused. ASP Gaurav Tiwari, CSP Vijay Davar, TI RK Singh and others played active role in cracking the murder mystery.

This article originally appeared on freepressjournal