An Aranguez, San Juan landlady was bludgeoned to death with a hammer yesterday morning after an argument with a tenant over unpaid rent. According to police reports, around 7 am, residents of Moulla Trace, Aranguez, reported hearing 45-year-old Vidya Persad arguing with her tenant. 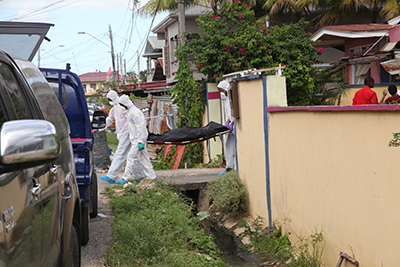 Her neighbours told police that after several hours of constant quarrelling, her yard went quiet and they then saw her tenant walking out of the yard and towards the Aranguez Main Road.

A couple of minutes later, a neighbour who was walking along the road saw Persad lying near her front gate. Police were contacted and when they arrived they found Persad with visible marks of violence to the head and face.

While searching in and around her property, homicide detectives found a blood-stained hammer which they believe was the weapon used to attack her. She was pronounced dead by a district medical officer (DMO), who ordered her body removed to the Forensic Science Centre in St James, where an autopsy will be performed this morning. Homicide detectives said the suspect, who is in his 20s, had not been arrested up to late yesterday.

Up to late yesterday evening officers were seeking a warrant to search the man’s apartment, which he shares with his girlfriend. It could not be confirmed if investigators had interviewed his girlfriend, who was not at home at the time. Detectives were also said to be reviewing CCTV footage from a nearby business for an image of the suspect. When a news team from the T&T Guardian visited yesterday, neighbours said the suspect moved into Persad’s property a little more than four months ago.

“I don’t think he pay rent since he move in. She was always quarrelling with him for the rent,” a neighbour said. The neighbours said the suspect did not speak much with them. They all said they hoped the police would be able to detain him quickly. “I hope they find him soon, so he would go to a place where he don’t have to pay rent or buy food,” another neighbour said.

Persad’s niece Savi Durga said Persad lived in Barbados with her husband and would visit Trinidad regularly to check on the property and collect the rent. “He was not paying for months and a couple of days now she was trying to evict him,” Durga said. She could not say exactly how much the suspect owed Persad, but investigators said the apartment was being rented for $2,100 a month.

The killing raised the murder toll for the year to 227. Insp Wayne Lawrence and Cpl Jones of the Region Two Homicide Bureau are probing Persad’s murder.

This article originally appeared on guardian