In the hallway of a high-rise apartment building in downtown Maple Ridge, two RCMP officers sift through boxes of belongings, setting a stack of laptops and a ‘Roomba’ vacuum aside. 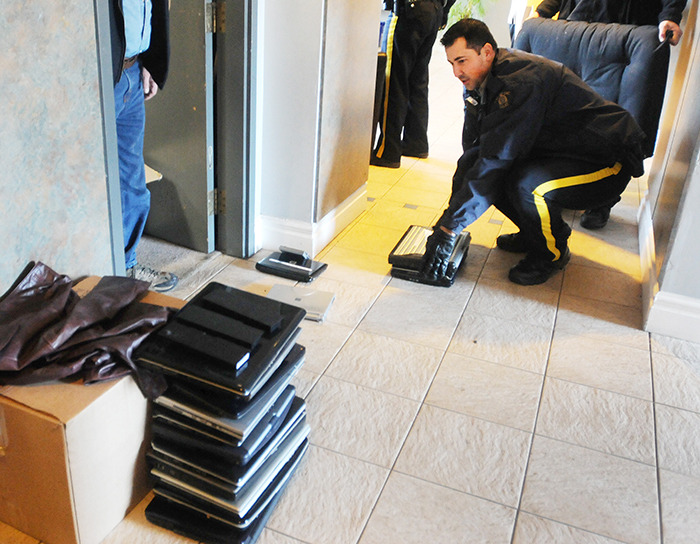 The pile is just a fraction of the stolen goods found in apartment No. 404 of the Gordon Towers after its tenants were evicted by bailiffs. Among the stack are four MacBooks that belong to the school district.

Tenants from three of six units Athwal owns in the building were turfed out Tuesday, their belongings hauled out by movers and dumped in the parking lot.

Athwal is currently facing a string of civil lawsuits as banks and the building strata try to recoup money he owes them.

Facing the threat of foreclosure, Athwal says he sold all six units at a loss.

He claims the tenants were evicted for not paying rent, with one unit owing him cash for more than five months.

“I got court orders,” said Athwal. “I gave them enough time. Everything was proper.”

Athwal, who owns 30 rental properties in Maple Ridge, claims he is selling all his assets, retiring and getting out of the business that made him “the Donald Trump of Maple Ridge.”

“I’m getting pretty old,” he added. “I want to go travelling.”

As for the stolen property found in one of his units, Athwal urged police to charge the tenant responsible.

Caught in the middle of the mess is Shelley Greenall, who lived in unit No. 304 with her boyfriend Greg and 16-year-old blind cat Wingnut.

“I have nowhere to go,” said Greenall, who claims she has paid Athwal rent, including for the month of December.

She admits she got an eviction notice and order of possession in July, but thought it had been quashed after she caught up with rent owed.

Athwal said a possession order is valid for a year.

“We never believed this was going to happen,” said Greenall, who has her belongings stored in a friend’s garage.

“No one came in and looked at our place before it was sold. It was a drive-by appraisal. We thought we would get 30 or 60 days notice. He can’t do this because he has accepted our rent money.”

Greenall, however, has little recourse as a new owner is set to take possession of her former home. A friend, who asked to remain anonymous, describe their situation as being caught in Athwal’s destructive wake.

“It is as though he is an F6 Hurricane that can’t be stopped, leaving all others to deal with the aftermath by picking up the pieces,” she added.

The District of Maple Ridge has yet to clarify why Athwal has continued to rent out apartments and homes without a business licence.

It revoked Athwal’s licence in 2009 after repeated problems with one of the properties he owned – Northumberland Court, townhomes on Fraser Street that have since been demolished.

The district said that the business license was “site-specific.”

In 2012, though, district staff recommended a change to a bylaw that would require anyone who rents out more than one property to apply for a business licence. Staff are also compiling a list of owners who operate more than one rental property in the municipality.

Bylaw director Liz Holitzki assures taxpayers that the district still plans to move forward with the bylaw change early in the New Year.

“We are just waiting for some information from our solicitor and to gather the background data we require,” she added.

The other owners in Gordon Towers are heaving a sigh of relief because they’ve finally rid the building of problem tenants – a battle that lasted four years.

The strata had to impose a special levy of $500 last year so they could sue Athwal. The spacious apartments offer beautiful views of the Golden Ears mountains and many residents hope this week’s evictions and sales are the start of a new phase.

The strata has since put rental restrictions on units, which means no new owners will be allowed to rent out their properties.

“We have cleaned up a huge mess,” said the building manager, who can’t be named as he is the victim of a murder plot Athwal is accused of hatching.

“We tried to reason with the landlord and help him get good tenants, but he didn’t want it.”

He added residents, especially seniors, were living in fear and putting up with people pushing their way through the front door.

“We are so glad that it is over. This is a great location for people to live.”

The first involves a murder plot at Gordon Towers, which was set to go to trial this month, but has been postponed.

He also faces one count each of uttering threats to cause death or bodily harm and criminal harassment for threats against another tenant and a breach charge connected to violating bail, as well as a charge of sexual assault.

He is also faces uttering a threat and assault charges in Surrey.

Athwal claims he is innocent of all the criminal charges and blames the allegations on his disgruntled tenants.

“It’s all tenants trying to hurt the landlord,” he said.

This article originally appeared on mapleridgenews