Three kids locked in a room, a 16-year-old drunk and high and a beat-up girlfriend. A criminal complaint says that’s what police stumbled upon this weekend at an Albuquerque apartment building. 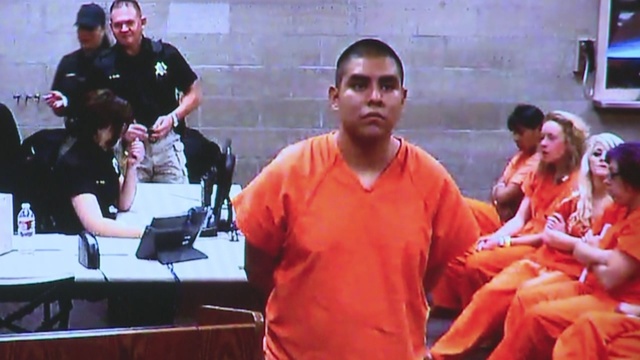 A woman who was there says not all of that is true. When asked if anyone had been punched in the face, the apartment’s tenant told News 13 yes.

Early Saturday morning, that’s the call cops were responding to at Valencia Court in southeast Albuquerque. Once inside one of the apartments, a criminal complaint says officers smelled marijuana and noticed everyone inside was also drinking.

The tenant, who didn’t want to reveal her identity, spoke to News 13. “It was just me and a couple, maybe four other people,” the tenant said.

But the criminal complaint goes on to say a 1-year-old, 2-year-old and 7-year-old were found locked in a back room while the adults partied.

The tenant says that isn’t true. “The kids weren’t even locked in the back room,” she said. “They were actually all asleep when the cops showed up.

That isn’t all cops say they found. The complaint also says a 16-year-old was found drunk and high. Again, the woman living there says that isn’t true.

Eventually, police arrested Lendall John for contributing to a minor. Those at the apartment say he punched his girlfriend in the face, and that’s what initially brought police to the apartment.

He made his first appearance in front of a judge Sunday morning.

“This is my first felony so I’m not going to run anywhere,” John told the judge. John asked to be released, but the judge said no. He’s still behind bars on a $1,000 bond.

John has only lived in Albuquerque for the past two weeks. He did not face any charges Sunday for the incident involving his girlfriend.

This article originally appeared on krqe