‘One bad tenant can ruin an apartment’

Mercedes Ohirko and Celeena Arcand stand in a cramped apartment hallway. It’s the middle of a work day, and the building is calm.

Three years ago, in one of these apartments, 23-year Chantelle Cathcart was stabbed to death at a party. 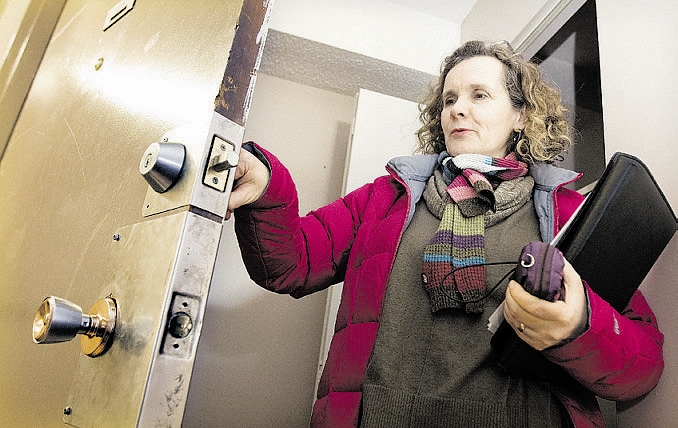 Arcand and Ohirko work for Sasknative Rentals, the non-profit organization that runs the building.

Since that tragedy, things have improved at the 22nd Street apartment. Now they are hoping to get certification in a police program designed to make the place even safer.

“One bad tenant can ruin an apartment. That’s all it takes – one bad tenant,” Ohirko said.

The Mount Royal apartment building is undergoing certification for Saskatoon’s crime-free multi-housing program, which is aimed at educating landlords and helping to reduce crime.

Sasknative Rentals already does criminal record checks on new tenants before they move in, but once the building is fully certified with police, the organization will have access to police information about tenants who break the law afterwards – giving it more power to evict troublemakers.

While Ohirko and Arcand talk, Donna Thiessen, the co-ordinator of the program for the Saskatoon Police Service, checks the deadbolt on an apartment door. It’s a routine part of her inspection.

“First, I would check the door and the deadbolt. And the (peephole) viewer – it’s good to have the fish eye, so you can actually see what’s going on out in the hallway,” Thiessen said.

The crime-free multi-housing program is in its fourth year. Police and landlords are seeing results, Thiessen said.

Since its inception in 2010, apartments participating in the crime free multi-housing program have received fewer calls in every problem category – domestic abuse, disturbances, noise complaints, drunkenness and suspicious person and suspicious vehicle calls – than apartments not enrolled in the program.

The program has three phases. The first is basically about education – teaching landlords about preventing crime and how to spot potential problem tenants.

The second requires prospective landlords to document problems and recommend upgrades – such as improving sight lines around buildings and installing better lighting.

In the third phase, building owners and tenants are brought together for community-building events. Once certified, building owners are given access to abbreviated records of calls for service to incidents in their building.

But Thiessen said the increase in calls in some areas isn’t necessarily a bad thing, because it means residents are being more vigilant.

A few kilometres away in the Confederation area, Thiessen toured another apartment block. Inside a vacant unit on the ground floor, she looked out the window.

“The parking lot was a real issue in the past,” she said. “Lots of break-ins to vehicles. It got to the point where residents parked on the street instead of the parking lot.”

Since the apartment got on board with crime-free multi-housing, calls about suspicious vehicles or suspicious people in the parking lot spiked dramatically.

The program now involves 24 fully certified apartments – only a tiny fraction of the rental units scattered throughout the city.

But momentum is growing. More than 150 properties – like the two run by Sasknative Rentals – are currently undergoing certification. Workshops run by Thiessen and her small team are another big component of the program.

Recently, a few dozen landlords attended a seminar about how to spot the signs of domestic violence in their properties.

“If you start to notice punch marks, kick marks on the walls … those are signs that domestic abuse is happening,” Const. Kimberley Robson told the group.

“You may be going to properties, picking up debris, but no one is talking.”

Robson says while domestic violence calls can be some of the most dangerous, crime-free multi-housing makes it easier to help tenants because they have a direct line to police.

As she makes her way through a unit, Thiessen checks windows and locks, making sure people who aren’t supposed to be there don’t have an easy way in. In domestic cases, people will often try to break in through balcony windows; that’s why they should have double locks, she says.

Thiessen admits there are still some areas that need improvement.

In the last six months, 10 of the properties undergoing certification saw increases in crime. A large number of apartment blocks in Saskatoon are also run by absentee landlords, who have no interest in the program.

But for people who are on board, there’s improvement.

“I think it is working, even at the stage we are at,” Arcand said.