A tenant at Qian “Necole” Liu’s home recalled Tuesday how he discovered her corpse after an urgent message tipped him off that she was “in danger.”

Zhimming Zhuo said his roommate phoned him to knock on Liu’s door on the morning of April 15, 2011 after her former boyfriend messaged him, saying she was in peril. 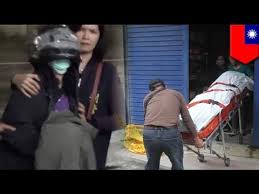 “Liu’s ex-boyfriend back in China left a message with my roommate, saying she was in danger,” testified Zhuo.

Fellow tenant Brian Dickson, 32, is accused of first-degree murder in the killing of Liu, 23, at her Aldwinkle Heights residence.

He has pleaded not guilty to the murder charge but guilty to manslaughter — a plea that the prosecution has rejected.

In her opening to the jury Monday, Crown attorney Christine Pirraglia alleged that Liu and her ex-boyfriend, Xia Chao Meng, were engaged in a lengthy, online chat when Dickson barged into her home.

Meng saw an intruder make unwanted advances at her, but never witnessed the deadly violence that followed, said Pirraglia.

Meng frantically sent computer messages to Liu’s pals to help her, which were answered by Zhuo and the landlord, court heard.

“Liu was lying face down on the floor and she was naked from the waist down,” recalled Zhuo, who aided Liu a few weeks earlier by fixing her Wi-Fi problems.

Her undergarments were next to her feet, Zhuo told the jury.

He also noticed that her computer was missing, although the mouse and power cords remained in place.

After 911 was called, paramedics Alvin Yohalogarasan and Heather Edward arrived at 11:07 a.m. But they remained in Liu’s basement apartment “for a minute, tops,” court heard.

“I attempted to pull her left arm and there was rigor mortis,” Yohalogarasan testified. “It was very stiff.”

Rigor mortis is a sign that a death occurred a long time earlier.

“I told my partner this is Code 5 — which means that resuscitative efforts are futile. We proceeded to leave the room,” Yohalogarasan said, adding the paramedics waited for a minute for the police to arrive.