A Lake County jury found a landlord guilty in the 2012 shooting death of a tenant on Thursday afternoon.

It took the jury more than three hours to come back with a second-degree murder verdict against Pablo Infante, 47, who admitted he killed Jeffrey Allen Henrickson Sr. as the victim held his 18-month granddaughter. Infante had claimed the shooting was in self-defense. 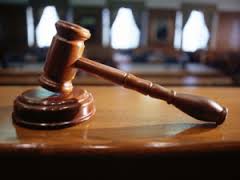 Infante had been charged with first-degree murder and was facing mandatory life in prison if convicted on the charge. The jury’s downgrade to second-degree murder means a judge can sentence him to between 25 years and life.

Standing outside the Lake County courtroom Thursday afternoon, Assistant Public Defender Morris Carranza said the jury must not have believed the shooting was premeditated.

“Let’s say it was a favorable outcome,” Carranza said of the verdict.

A sentencing date has not been set.

The shooting occurred in front of the home Infante rented to the victim on Discovery Road in Sunset Groves, outside of Tavares.

According to testimony in the trial that started Tuesday, there had been an ongoing dispute between the two men over accusations that Infante had taken sexual advantage of one of Henrickson’s relatives after a night of drinking.

Infante started an injunction for protection against Henrickson on Oct. 23, 2012 but never completed it.

On Oct. 24, after Henrickson arrived home with his ex-wife and grandchild, the two men began to argue. Prosecutors say Infante walked into his home, grabbed a .22-caliber rifle and chased Henrickson around the vehicle while firing several shots.

As he held his grandchild, Henrickson was struck in the back and chest as he tried to hand off the child to his ex-wife.

The defense argued that Infante shot him because he believed Henrickson was going into his vehicle for a gun and that the victim kicked at him.

Infante, who took the stand Wednesday, said he initially didn’t claim self-defense when talking to detectives because it would have made him look weak to admit he was afraid of Henrickson. He said he had slept in a closet out of fear.

“He (Henrickson) was capable of killing someone like Pablo Infante and Mr. Infante knew that in his heart and his mind,” Carranza said.

No gun was ever found in Henrickson’s vehicle and he later died at the hospital. Assistant State Attorney Hugh Bass, who co-prosecuted the case, said Infante had tried to take the law into his own hands and there was a trail of live and spent rounds at the murder scene that indicates Infante was chasing the victim.

“The jury had a tough decision to make,” Bass said shortly after leaving the courtroom.

Lake County Sheriff’s deputies who arrived on the scene testified Infante told them, “I shot him,” and the victim “kept (messing) with him” and “I didn’t mean for it to go this far. I just got upset.” Deputies say the defendant didn’t say anything about self-defense.

Carranza told the jury Thursday during closing arguments that Infante had just moved from Cuba to America in 1995 and didn’t know at first that self-defense could be used in this country as justification for killing someone.