Tenant charged with murder of landlord in Brooklyn

Police have a suspect in custody after an apparent landlord-tenant dispute turned deadly in Brooklyn. Authorities say 27-year-old Rasel Siddiquee was arrested at JFK Airport Tuesday night while he was trying to flee the country. 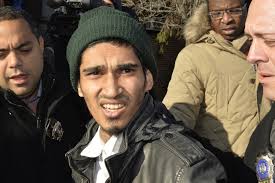 He was taken into cusody less than an hour before he was to board a flight to the Middle East. Authorities say he had a one-way ticket to Kuwait and was waiting for a 9 p.m. flight. He had hoped to fly on Kuwait Airways and then take a second flight to Bangladesh.

Siddiquee is now facing murder and weapons charges in the death of 57-year-old Mahuddin Mahmud. The Bangladesh native was found by his brother Habil stabbed and burned inside a basement office in the Kensington section.

The victim rented out an electronics business and worked in check cashing.

Family members say a safe was opened and $20,000 missing.

Neighbors are horrified and heartbroken. “I knew this gentleman in the community, very helpful, this is unfortunate,” neighbor Mian Maniky said. “We’re just trying to comfort the community and the family.”

Mahuddin Mahmud was a husband and father to two young sons, ages 9 and 4. Siddiquee allegedly made statements to detectives linking him to the crime. He is being held at a police precinct in Brooklyn and will be arraigned.

Siddiquee was charged with murder and criminal possession of a weapon.