His tenant, Duane Mitchell, was known for partying, and Gorham figured to leave well enough alone. He left for work, but when he returned at 9 a.m., the music was still blasting. 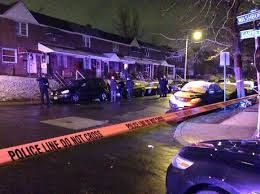 The 73-year-old landlord walked over and, in the doorway, saw Mitchell’s thin body splayed out, face buried in dingy beige carpet, dried blood covering the back of his bald head. Baltimore police said Mitchell, 52, was killed by trauma from an unknown assailant sometime Thursday night or early Friday.

Gorham touched Mitchell’s shoulder. “He was cold as ice,” he said. For the past three years, Gorham said, he had been trying to keep fate at bay, paying off Mitchell’s debts, pulling him off the street corners.

Gorham is a married minister who had raised three children — now all about Mitchell’s age — who lives in a sturdy brick house where gold-plated china was always set on the glass dining table and family pictures decorated the kitchen.

Mitchell had been married and had a daughter but bounced from a relative’s home to vacant houses. He had drug problems, Gorham said, and state court records showed that he had been convicted of theft and three drug offenses between 1997 and 2012.

He couldn’t live with his family, Gorham said, “so I took him in.”

Gorham knew Mitchell because he had grown up a block from Gorham’s home in the 4100 block of Fernhill Ave. He let Mitchell move into his garage apartment three years ago because the man needed a place to stay.

“I viewed it as a sickness,” Gorham said of Mitchell’s problems. “I take anybody in. People knock on the door, say they’re hungry, I fix them a plate.”

He gave Mitchell odd jobs. Whether it was cleaning an inflatable pool, wiping down car rims or picking up the newspaper, Mitchell always asked for cash.

Although Mitchell received Social Security through Gorham, the minister said, his tenant still broke into his home.

When he caught Mitchell in his fridge after having climbed through a window, he said he fed him. He gave him a favorite pinstriped suit that no longer fit, and Mitchell sold it or gave it away, Gorham said.

He often accused Mitchell of using drugs, but he said he never saw any.

“He was always saying he owed somebody some money,” Gorham said.

People showed up at Gorham’s door saying Mitchell wouldn’t repay the $10 he owed. So Gorham said he would.

When Mitchell paid off a $20 debt by selling a 40-inch television that Gorham had bought him, Gorham said, he tracked the buyer down and offered $20 to get it back. But the TV had been flipped for $50. Gorham again tracked it down but said it had been sold for $100.

A neighbor who said Mitchell was his children’s uncle but did not want his name published because he’s fearful a suspect has not been arrested, said “Mr. C” or Gorham was Mitchell’s lifesaver.

“Loved him like his own son,” the man said.

And neighbors knew Mitchell as such. When they saw him hanging out on the street corners, they told Gorham to go get his “son.”

Hours after detectives studied the blood spatter that covered Mitchell’s apartment’s walls, Gorham went into the carriage house for another look.

The tiny rectangular one-bedroom house reeked of cigarette smoke, and a blue comforter remained on the love seat Mitchell slept on. The stereo that had been blaring sat on a tall shelf next to an end table with pictures of bikini-clad women that Mitchell had ripped from Jet magazines.

“Gonna strip this place,” Gorham said while hoisting a broken cabinet door back onto a wicker dresser. “Paint it down. I’m not gonna have no one live here this year. Or next year.”